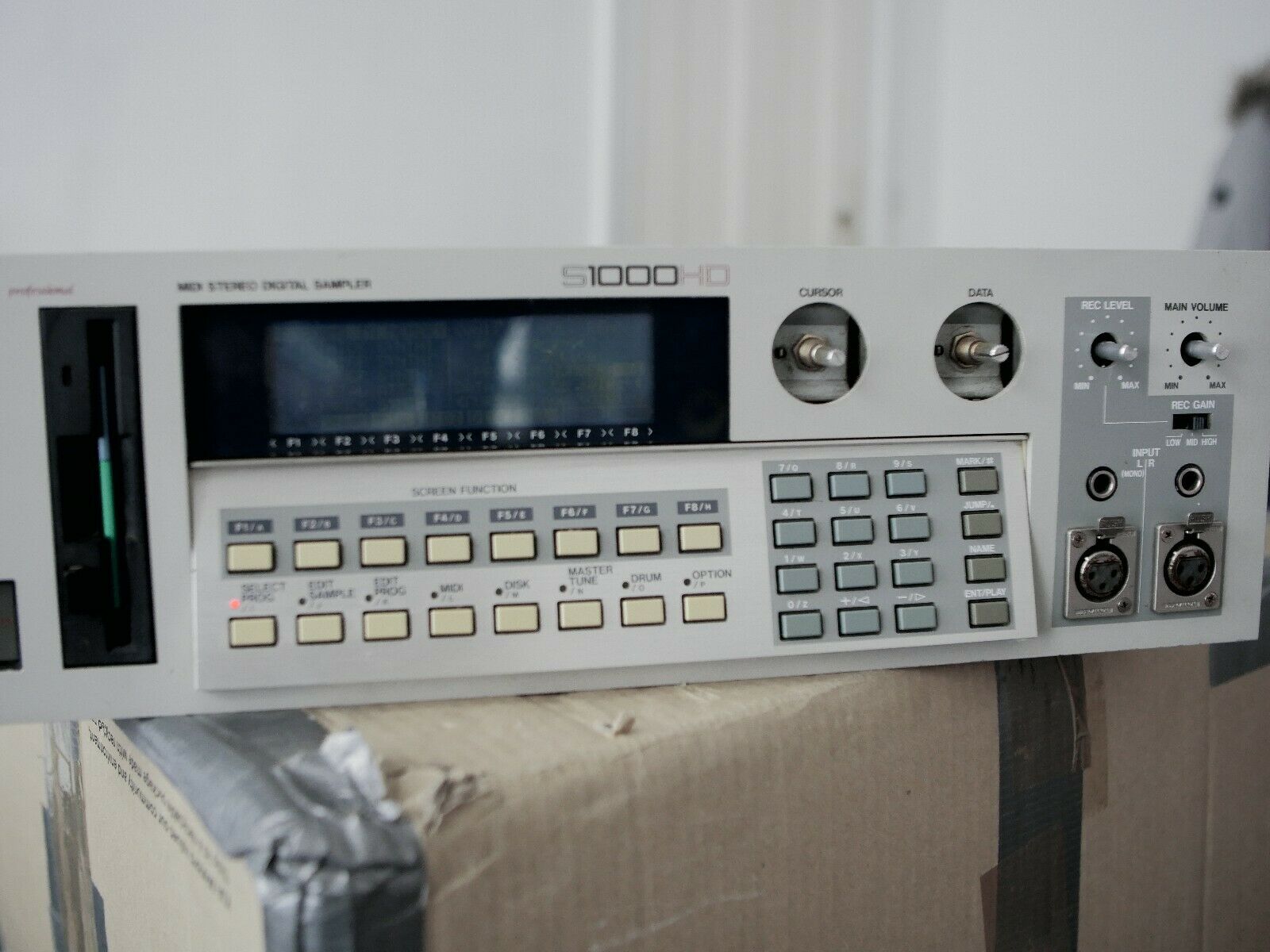 “AKAI S1000 HD SAMPLER HAS U CAN SEE FROM THE PIC IT SOME TIMES COME ON . SOME TIMES IS DOES NOT . THE DRIVE WORK . SELLING TOO CLEAR” Click here to visit listing on eBay “Akai S1000HS 20MB, 8 output SCSI sampler spares or repair. Screen backlight, floppy and hard drives not working. Has ROM4.4, SCSI card and 20MB memory. Used to belong to Trevor Horn according to sticker on back panel. I had it from someone who used to work with him. Condition is for parts or not working. ”
Click here to search for MPCs on eBay “Akai s1000HD . Condition is Used. Scrat hes on one knob face and rack ears look great. Has the st1096n 80 gig hard drive that is listed used on ebay for $186” Click here to search for MPCs on eBay

“As you can see from the photos, the unit is in mostly pretty good order. Just a few scuffs here or there but otherwise cosmetically pretty fine. The backlight – like in most models of this kind – is now faint, but still quite visible when turned up to maximum contrast (see photo). A new backlight can be purchased for around £20-30 apparently.

As you can see from the photos – the front XLR inputs are a little corroded on the surface but I think this is purely cosmetic and they should work fine.

I will be completely honest here and say the unit did have some trouble years ago, when the hard drive failed to load up. This seems to have resolved itself now, but the drive is still a little noisy at times. Hopefully it still has a good bit of life in it!!” Click here to search for MPCs on eBay “Up for auction is my last Akai S1000 HD, And look what I found…. My MicroNet Technologies 88mb C Drive bay, SCSI cable, and a removable Syquest Drive full of S1000 Samples and Keygroups. As you can see… I FIXED THE DISPLAY! ($130.00 + my time). Largest memory available, and a large internal hard drive for samples and song keygroups. It also has the 3.5 floppy drive for S900-S950 and S1000 samples. Then store the samples internally on the drive in the S1000, or on to a Syquest removable drive. No more reloading of floppy disks like the S900’s and S950’s. I bought it all new in Los Angeles back in the early 1990’s. The sampler was used on many major label records during my career in LA. Works perfectly! There is some rack rash (usual). It’s just time for me to let it go to someone who wants to carry on its legacy. Look closely at the display pictures for some of what’s on the removable drive. There are a boatload of samples on the removable drive (roughly the equivalent of 30 to 40 3.5 floppy disks). The removable drive is worth some serious coin all by itself. Very cool stuff. This is the perfect vintage system! When you base out the various items and the new display, the S1000 is priced at about $300.00… Okay…. Tell you what I’m gonna do. I’ve got, at the least, 40 to 50 3.5 S900, S950, and S1000 floppy disks on top of what’s on the removable drive. I was going to sell them separately. I will include them in this auction just to be done with my Akai life. See the added pictures. Some of the floppy’s in the picture are Mac, but I’ll sort them out. “This sampler is in excellent working condition, never had problems with it,

** it was serviced month ago due to age and got fixed following issues: