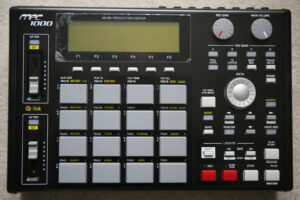 “NEAR MINT condition MPC 1000. I bought it from the second owner who said he hardly used it and sat in a box for the majority of his time with it. He bought it unused from it’s first owner which was a theatre group.

I bought it to use as a master midi sequencer for my hardware set up as I needed something that had midi timecode (to use with my HD 24 recorder). I have had it for about two months. However I have reached the top of the Cirklon waiting list and have now purchased after 3 years of waiting so I now have no need or space for the MPC anymore.

I have installed the full version of JJOS XL which expands it functionality to new levels. The sampler comes with all the manuals, power leads, boxes and a 4GB memory card.”