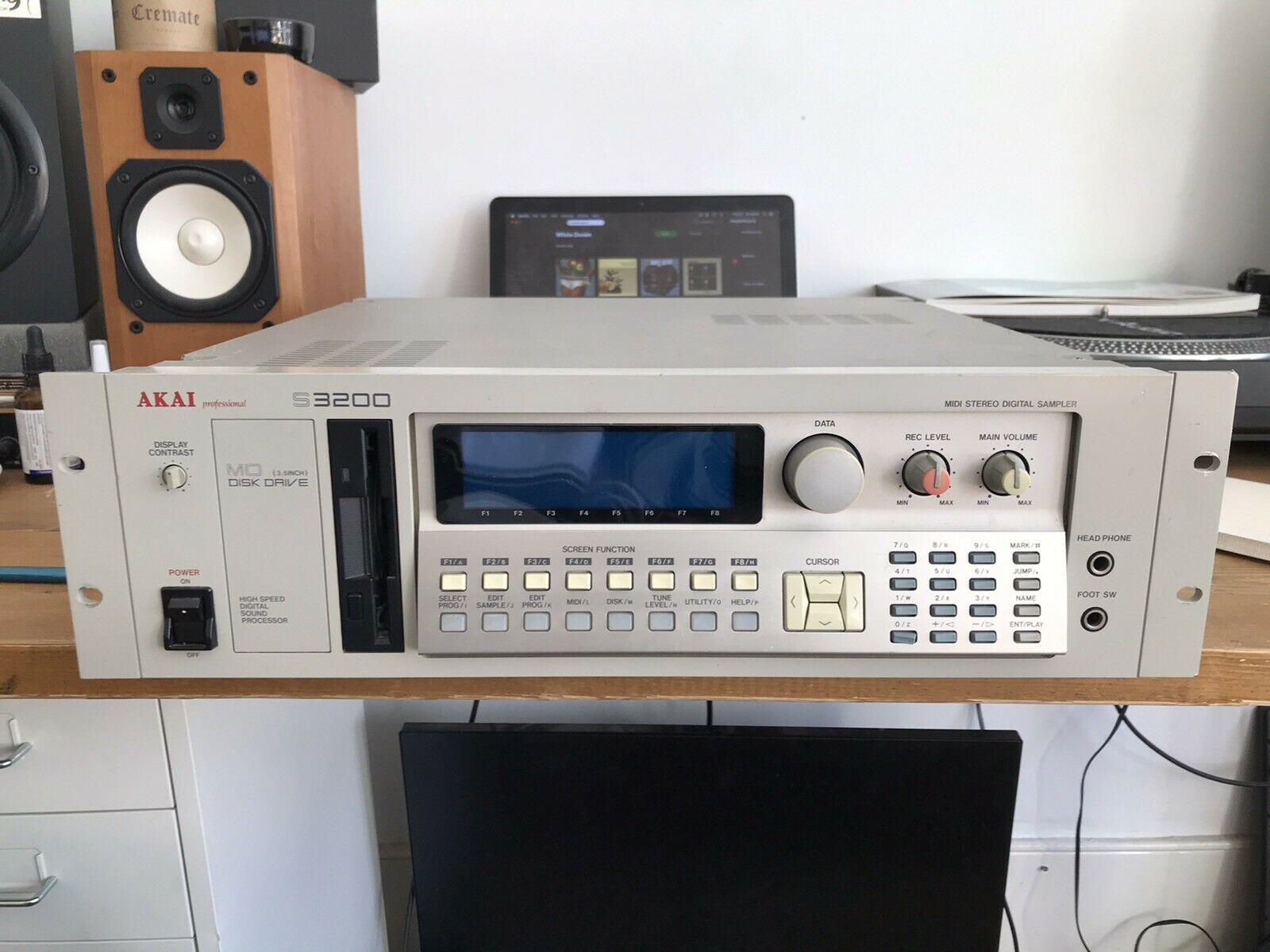 “Akai S3200 Vintage Sampler in excellent condition. All works as it should, screen still clear. Few scratches / minor wear and tear but purely aesthetic. Collection can be arrange from central London, Kingston or Gosport. ” Click here to visit listing on eBay 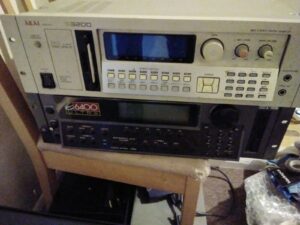 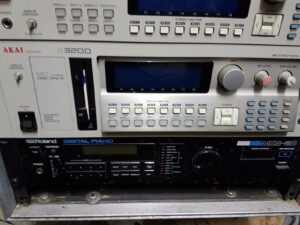 “For sale is a 3200 Sampler. Infinitely better than the XL range that were produced when Akai were sold and went cheap on their samplers. If you’re looking at this, you know what it is, what it does and how highly sought after these are becoming.

This was serviced about 18 months ago and fitted with a brand new LCD screen that is clear to read and doesn’t rely on the out of date EL panels.

It’s installed with the latest OS (2.0), has 24MB of RAM and is fitted with the digital I/O card (featuring ADAT and AES), SMPTE and SCSI.

It’s in good overall condition considering it’s age. It’s been sat in our racks for a few years and I think it has a couple of light scratches on top of the unit but the visible part looks fine.

It hasn’t been used for about a year and is no longer wired into the studio looms so I can’t test it properly but it was working the last time we used it, and as you can see from the photos it boots up fine and all the front panel buttons work.

Note this is not fitted with the HD. ” Click here to search for MPCs on eBay

One of the best sounding samplers ever made. If you have ever been looking for an mpc 3000, this is great option as they have the same convertors/sound but it has a much more advanced feature set.

*This sampler no longer has a floppy disk drive.”
Click here to search for MPCs on eBay The condition of this item is ‘used’. Please read on for more detail on that and note that it is ‘sold as seen’ as I’m not in a position to be able to thoroughly test all functionality.

That said, it is alive! It switches on and boots up, receives midi and spits out signal from all ten outputs. Beyond that I cannot vouch. More detail below.

I purchased this then flagship AKAI sampler when working for Microprose the games company back in the late 90s. I subsequently purchased it from them secondhand so it’s been with me its entire life.

We went all out on the spec with SMPTE card, hard disc drive, digital card, maxed-out memory and SCSI card. Also has the fx board (which may have been standard? Can’t remember).

This sampler has had a pretty stress-free life mostly in various project studios, occasionally gigged (in SKB rack) and given it’s lifespan hardly used. For quite a few years now, it’s been unused in safe clean warm storage only switched on now and then.

The display seems completely functional but to my eyes on the dim side. It’s hard to photograph but I’ve tried – if anything, phone photos tend make it look worse than it is due to reflection. I looked into replacing the backlight and although a new one is relatively cheap, fitting one is beyond my confidence level having taken the lid off and had a peek under the hood (hence some of the pix showing a surprisingly clean and tidy interior).

All the buttons and knobs seem to be working and so is the floppy disc drive. I’ve successfully loaded a program and samples from a 3.5″ floppy disc.

There is an internal hard disc drive fitted inside this item but I can’t seem get the machine to read it so it may be out of commission – further evidenced by trying to use the ‘park’ function which after attempting to park the heads shows the message ‘bad park’. The unit boots up without a floppy disc so guess the o/s is on a RAM chip?” Click here to search for MPCs on eBay “Akai Professional S3200 Midi Stereo Digital Sampler. Condition is For parts or not working. Blank panel missing on front, powers up but nothing seems to come on screen, that’s as far as I have tested it” Click here to search for MPCs on eBay “Comes with detailed printed manual. Cosmetic
wear and tear from use, comes as seen in
photos with nothing else.”